Kitchener appeals for the “First Hundred Thousand Recruits”.  As part of his appeal the poster “Your King and Country need you”, will be published in a few days.  The first of the ‘Service’ Battalions raised by Lord Kitchener is the 4th (Service) Battalion, South Wales Borderers under Lieutenant Colonel Franklin Macaulay Gillespie. Lieutenant Colonel Gillespie will be killed in action while directing the fire of a machine gun 9 August 1915 on Gallipoli at age 42.

An advance party of the BEF lands in France.

Troops of the Gold Coast Regiment cross the border into German East Africa in the first British offensive of the Great War.

Portugal informs Great Britain that it intends to honor its treaty obligations.

Retired Rear Admiral Charles Davis Lucas VC dies at age 80 and is not listed as a Great War victim in the Commonwealth War Graves Commission web site. On 21st June 1854 in the Baltic, Hecla, with two other ships, was bombarding Bomarsund, a fort in the Åland Islands off Finland. The fire was returned from the fort, and at the height of the action a live shell landed on Hecla’s upper deck, with its fuse still hissing. All hands were ordered to fling themselves flat on the deck, but Lucas with great presence of mind ran forward and hurled the shell into the sea, where it exploded with a tremendous roar before it hit the water. Thanks to Lucas’s action no one on board was killed or seriously wounded by the shell, and accordingly he was immediately promoted to lieutenant by his commanding officer. Soon afterwards he becomes the first person nominated for and is awarded the Victoria Cross. 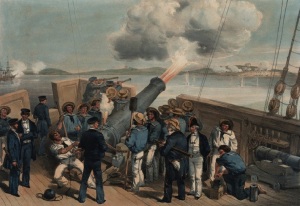