The first recorded British action of the Great War in Africa takes place.  Steaming parallel to the coast, Captain Alfred Sykes in HMS Astraea lobs several salvoes on the shore installations at Dar-es-Salaam and sends an armed party into the harbor. Commissioned in 1894, Astraea is on her last legs, and her outdated armament of two obsolescent 6-inch and eight 4.7-inch weapons are of little military consequence. Still she is more than adequate for the task at hand. This is done as part of Rear Admiral Herbert King-Hall’s, Commander in Chief of the Cape Station plan to deprive SMS Konigsberg of supplies, most importantly coal. The wireless station is destroyed and the German merchantmen Konig and Field Marschall are damaged. There is no opposition and two British seamen – Thomas Cann and William Smith – lounging on the jetty, carve their names.  A curious truce is signed: the Captain of the Astraea agrees that the Royal Navy will not attack the town and the local German authorities agree to refrain from all hostile activities for the duration of the war, and the town settles back into is pre-war ways. The German harbormaster hurriedly orders his floating dock towed out and scuttled across the harbor entrance. His hastily and ill-considered response provides the Astraea with a greater victory than King-Hall anticipated. By sinking the dock in the deep-water channel, the harbormaster foolishly bottles up the 8,000 ton East Afrika Line’s Tabora – thus depriving Konigsberg of a valuable auxiliary cruiser. At the same time, his extemporaneous block ship has cut the cruiser off from her vital coal supply. A similar truce is agreed upon with the German authorities at Tanga, an important coastal town 136 miles to the north.  Needless to say neither the British naval officers nor the German officials possess the authority to make such a truce and the British Admiralty refuses to acknowledge the agreement and sends a stinging rebuke to Captain Sykes. 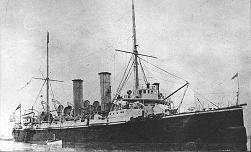 Private Frederick William Toll (Essex Regiment) is killed at age 31. His brother will be killed in November of this year.