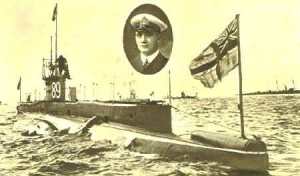 The submarine E9 torpedoes and sinks the German destroyer T116 off the mouth of the Ems River.

HMS Dartmouth, HMS Weymouth and HMS Fox join HMS Chatham searching for SMS Konigsberg. Captain Drury-Lowe divides the coast into four search areas stretching from Zanzibar in the north to Lourenco Marques in the south, a distance of more than 1,500 miles.  HMS Chatham concentrates in the area immediately south of Dar es Salaam, because of the persistent rumors that Konigsberg is hiding somewhere near Mafia Island. All four cruisers keep in constant wireless telegraph contact, not only with each other but with the coastal wireless stations from Durban to Diego Suarez, hoping that any sighting of the German cruiser can be reported to Drury-Lowe right away.

After a heavy bombardment a passage of the Dimamba is forced by a gallant attack by Senegalese tirailleurs, who, under a galling fire, swarm over the broken girders of the wrecked bridge. Other troops cross in barges and surf boats in an all-out effort.  The Germans retreat and Douala is made safe from attack from the east.  The way is prepared for an advance on Edea, an important inland town where the Midland Railway crosses the Sanaga River, but Brigadier General Dobell chooses not to move in that direction at this time.

British troops disembark at Ostend and Zeebrugge. Color Sergeant Thomas York (Royal Marines) is killed at age 42.  He served in the South African War and Boxer Rebellion and was a holder of the Naval Long Service and Good Conduct Medals.