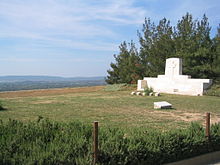 The Nek is a ridge fifty yards wide at the Anzac line, narrowing to only thirty yards at the Turkish front.  The opposing trenches at this point are only twenty yards apart and at least five Turkish machine guns cover the ground between.  A half hour bombardment of the Turkish positions by all available land guns as well as naval gunfire precedes a planned attack by the 8th and 10th Australian Light Horse regiments on the Nek.  For reasons never known, the bombardment stops at 04:23, seven minutes earlier than planned.  In the silence of the next seven minutes the Turks move to man the trenches two deep in readiness for the attack.

At 04:30 the men of the 8th Light Horse Regiment climb out of their trenches and charge the Turks.  This is met by a hail of Turkish machine gun fire which cuts down the entire Australian line within 10 yards of their trenches.  All officers are killed, including the commander, Lieutenant Colonel Alexander Henry White, who has insisted on leading his men into action, after saying goodbye to his troops with “Boys, you have ten minutes to live, and I am going to lead you”.  He dies at age thirty-three.  Lieutenant Eliot Gratton Wilson reaches the Turkish parapet where he is killed.  It is his 33rd birthday.  As soon as the first line clears the parapet the 2nd line takes their place.  Scrambling over the bodies of their fallen comrades, they meet the same fate.

Next comes the turn of the 10th Light Horse Regiment in the 3rd and 4th lines of the attack.  They know full well what has happened to their comrades in the previous two waves.  They also know most of them, if not all are going to certain death.  They shake hands with each other and quietly say goodbye.  Only a handful of the men reach the Turkish trenches where they are killed.  One light horseman, Private Wilfred Lukin Harper “is last seen running forward like a schoolboy in a foot race with all the speed he could compass”.  He too is cut down by gunfire and killed at age 25. This scene is highlighted in the movie “Gallipoli”. His brother Trooper Gresley Harper of the same battalion is killed at age thirty-one in the same charge. Also killed in the charge is Trooper Dudley Lukin whose brother will be killed in June 1918. The commander of the 10th, realizing that the objective cannot be taken, requests a cancellation of the attack. He is told the attack must be continued because of a report of a success. The slaughter continues. At the nearby Quinn’s Post, an entire line of 54 men from the 2nd Light Horse Regiment, except for one man, are killed or wounded within a few feet of their trenches.

When holding the north-west corner of ‘The Vineyard’, Lieutenant (Acting Captain) William Thomas Forshaw (Manchester Regiment) is attacked and heavily bombed by Turks, who advance time after time by three trenches which converge at this point, but he holds his own, not only directing his men and encouraging them by exposing himself with the utmost disregard to danger, but casually lighting bomb fuses with his cigarette, and personally throwing them continuously for forty-one hours.  (See 8th August 1915).

The opportunity for a swift victory at Chunuk Bair has been lost. The three battalions travelling along the north side of Rhododendron Spur are in position by 04:30 shortly before dawn. They advance to a knoll dubbed “The Apex” which is only about 500 yards from the summit where at the time there are only a handful of Turkish infantry. The Canterbury battalion on the south side of the spur is lost and delayed. Johnston makes the fatal decision to wait for the last battalion to arrive before making the attack. By 08:00 the Turks have started firing on the New Zealanders on the spur. In broad daylight, after an exhausting climb and faced by stiffening opposition, the prospects for a New Zealand assault against the peak looks slim. Nevertheless General Godley ordered Johnston to attack. Two hundred yards beyond where the New Zealanders are positioned on the Apex is another knoll called “The Pinnacle” from which it is a straight climb to the summit. Off the side of the spur to the north is a small, sheltered plateau known as “The Farm”.  Johnston orders the Auckland battalion to attack. About 100 men make it as far as the Pinnacle where they desperately try to dig in. Around 300 men fall as casualties between there and the Apex. Johnston tells the Wellington battalion to continue the attack. The battalion’s commander, Lieutenant Colonel William George Malone refuses, stating that he is not willing to order his men to carry out a hopeless attack. He says his battalion will take Chunuk Bair at night. During the day the New Zealanders are reinforced by two battalions from the British 13th (Western) Division: the 7th Gloucestershire Regiment and the pioneers of 8th the Welsh Regiment.

At Chunuk Bair Ridge after the New Zealand Brigade has attacked and established itself on the ridge, Corporal Cyril Royston Guyton Bassett (New Zealand Divisional Signal Company), in full daylight and under continuous fire, succeeds in laying a telephone line from the old position to the new one on Chunuk Bair.  He also does further gallant work in connection with the repair of telephone lines by day and night under heavy fire.  For his actions on this day Corporal Bassett will be awarded the Victoria Cross, becoming the first New Zealander to be awarded the Victoria Cross in the Great War.

At Suvla Bay progress is minimal. The two brigades of the 10th Division come ashore, adding to the confusion. In the heat of the day, the soldiers became desperate for drinking water. Towards evening two hills east of the salt lake are captured; these represented the sole gains for the first day ashore at Suvla. IX Corps has suffered 1,700 casualties in the first 24 hours, a figure exceeding the total size of the Turkish defenders. Stopford does not go ashore from the Jonquil and by the end of today the chain of command has completely broken down.

Lance Corporal Leonard Keysor (Australian Infantry) is in a trench at Lone Pine that is being heavily bombed by the Turks.  He picks up two live bombs and throws them back at the enemy at great risk to his own life.  Although wounded himself, he continues to throw bombs at the enemy, thereby saving a portion of the trench that is deemed too vital to hold.  For his actions on this and the next day he will be awarded the Victoria Cross.