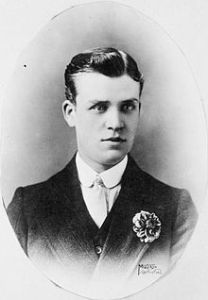 On the second morning of the Battle of Ctesiphon a weak Turkish attempt to counter-attack fails.  They try again in strength at night but again the British defence holds.

Lord Herbert Horatio Kitchener advises the government to withdraw all troops from Anzac and Suvla and warns them that casualties could be high in doing so.

Heavy losses are inflicted on the enemy at Yaunde in Cameroon.

Near the hamlet of La Brique a patrol of four men of the Rifle Brigade is reconnoitering towards the German lines when it is discovered close to the enemy who open fire with rifles and machine guns wounding the officer and one of the men. The latter is carried back to our lines by one of the unwounded men while the other Corporal Alfred George Drake stays with his officer bandaging his wounds in spite of the enemy’s fire. Later a rescue party finds the officer alive and bandaged but Corporal Drake is dead, his body riddled with bullets. For saving the life of his officer Corporal Drake will be awarded a posthumous Victoria Cross. The officer Lieutenant (later Captain) Henry Tryon will be killed on 15th September next year.

The Entente Powers send a note to the Greek government demanding non-interference with Allied troops, and guaranteeing eventual restoration of occupied Greek territory.