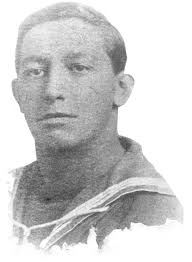 At Blandford, during grenade practice, a live bomb thrown by one of the men under instruction falls back into the trench. Petty Officer Alfred Place rushes forward, pulls back two men who are in front of him and attempts to reach the grenade with the intention of throwing it over the parapet.  Unfortunately the bomb explodes before he can reach it and inflicts fatal injuries on Petty Officer Place. By his coolness and self-sacrifice Petty Officer Place probably saved the lives of three other men.  For his action he will be awarded the Albert Medal posthumously.