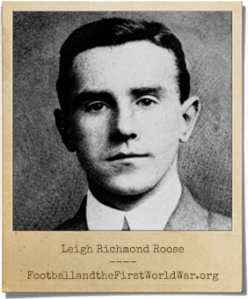 After a delay of two days the Battle of Transloy Ridges (which will last until 20th October) begins with attacks directed toward the German held positions near Beaulencourt, northwest of the British held town of Guardecourt. The German trenches to be attacked are given the names of Bayonet, Scabbard, Rainbow and Stormy trenches. The opening British artillery barrage is met with heavy and accurate counter fire from German artillery which greatly reduces the effectiveness of the British bombardment and leaves a significant portion of the German machine gun positions undamaged. By the end of the day’s attack 2,022 British officer and men will be killed.

The Royal Fusiliers come under heavy machine gun fire during the assault on Bayonet trench. They make gains and hold the land until relieved in two days. 254 Men and officers are lost in the attack which will be the final action the regiments makes on the Somme.

Dear Meg, Now I’m a simple Tommy
I thought you’d like a letter from me,
Living a silent celibate
With 20 others in a hut.
My bed of wooden boards and trestles
And blankets thick with which one wrestles,
While the cold night wind through the door
Keeps time to rats that scour the floor.
A Sergeant stern with language rude
Who tell me that my drilling’s crude,
And boots two inches thich, which they
make me to clean three times a day.
But even hear where bugles ring
The Southern lark goes up to sing;
And nobly stretch the long white downs
O’er looking Hampshire’s famous towns,
Where years ago through woods of fir
King Alfred rode to Winchester;
And hear is haunted, wholly ground
Where Arthur held his Table Round,
And Ethelbert and Athelstane
Drove back the foray of the Dane.

And so farewell – if when May comes,
And snow-white gleam the garden plums,
You run across the yard to school
Hair-braided, with your reticule,
Then think of me, my little maid,
Forming for nine o’ clock parade,
And making an egregious hash
Of drill and growing a moustache !