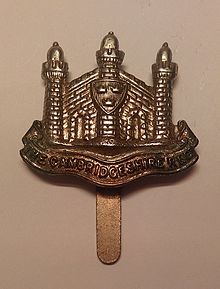 During one of the engagements that were part of the costly Somme offensive, the Cambridgeshire Regiment assaults and successfully captures the Schwaben Redoubt. The Territorial Cambridgeshire ‘Fen Tigers’ under the command of Lieutenant Colonel Edward Pius Arthur Riddell DSO advance under a creeping barrage and are in among the defenders without loss of life. The fierce fight that follows devolves into a hotly contested struggle, commanded by corporals and junior commanders with bayonet and grenade. The German occupants are routed and the Cambridgeshire Regiment goes on to successfully defend the Redoubt for a further 24 hours before being relieved, having beaten back several determined counter-attacks. By First World War standards British loss of life is light, with 218 men killed or wounded. The success is so impressive that General Haig recounts the attack as being “one of the finest feats or arms in the history of the British Army”. For their personal skill and bravery, 41 awards for gallantry will be bestowed on the Regiment.

At an aerodrome in France a bomb accidentally explodes in the mouth of a dug-out forming a bomb store which contains a large number of bombs packed in wooden cases and a quantity of rockets.  Two men are killed by the explosion and another man severely injured when he is thrown down into the store.  Dense volumes of smoke pour from the dug-out and there is danger of more explosions.  Second Lieutenant Frederick Stuart Smith and Sergeant William Ernest Rhoades (Royal Flying Corps) on hearing a call for help immediately enter the dug-out and succeed in rescuing the wounded man.  For their actions both men will be awarded the Albert Medal.