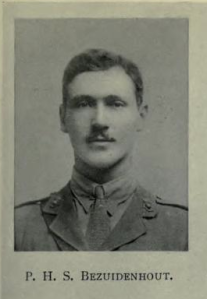 Captain Richard Alfred Beresford Chancellor (Royal Berkshire Regiment) dies of wounds from the effects of shell wounds while leading his men in a raid on enemy trenches the previous evening on enemy trenches at age 21 in Greece.  At Harrow he won the Shakespeare Medal and the Bourchier History Prize. G Townsend Warner dedicated his book “The Writing of English” to him.  Instead of going into residence at Oxford he obtained a commission in the Royal Berkshire Regiment on the outbreak of the War. Three months later he became Lieutenant and Captain in March 1916. He went to France with his Regiment in September 1915 where they were in reserve at Loos, and in the following December he moved with the Regiment to Salonika. Caring only for the conduct of the raid, he insists that the wounded men of his company be carried back first, and he remains “joking and cheering on his men, with absolute disregard for himself”.