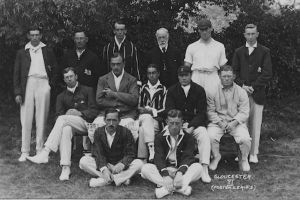 Captain John William Washington Nason (Sussex Regiment attached Royal Flying Corps) is killed at age 27.  He played cricket for Sussex County at the age of 17 and received his Blue at Cambridge on is third appearance, earlier than it had ever been awarded previously.  He appeared versus Oxford in 1909 and 1910 played for Gloucester County for years.  He was also a two handicap golfer.