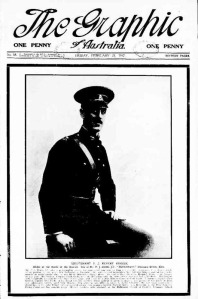 The commander of British forces in Egypt, General ‘Sir’ Archibald Murray, is eager to complete the advance across the north of the Sinai, believing this will compel the Turks to abandon their inland outposts. This evening the Anzac Mounted Division, under the command of General ‘Sir’ Henry George Chauvel rides out of El Arish towards Rafa where a 2,000-strong Turkish garrison is based.  The commander of the Desert Column, General Philip Chetwode, travels with the division to supervise the attack.  This will be the third and final major battle mounted by the British to drive the Turkish forces from the Sinai.

The aircraft carrier HMS Ben My Chree is hit and set on fire by Turkish shore batteries off Castelorizo on the southern coast of Asia Minor. She will burn for another two days and before finally sinking at her moorings.