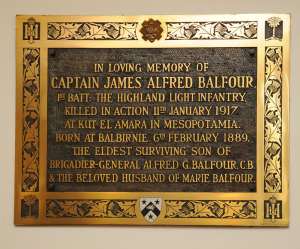 The aircraft carrier HMS Ben My Chree sinks at her moorings in Kastelorizo Harbor, having been hit by Turkish shore batteries off Castelorizo. She suffers no casualties.

In Mesopotamia after 14:00 the British attack under cover of heavy artillery fire but are forced back by a Turkish counter-attack which is itself halted by British machine gun fire. Among those killed in the days fighting is