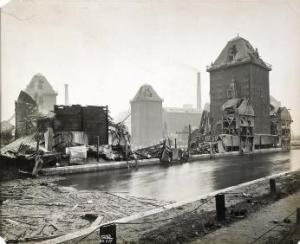 At 18:52 in Silvertown in West Ham the sky above Blackwall flashes bright as day when London is rocked by an explosion at the Brunner Mond TNT factory.  The factory has been producing munitions since the first months of the war, attracting many women workers who receive good pay for a job recognized as socially noxious because of the fact that their skin is yellowed by the chemicals used in the plant.  The factory is a small older plant unlike more recent munitions plants and the site is in a heavily populated area.  What has started the fire, which ignites fifty tons of trinitrotoluene (TNT) remains unclear. Seventy-three are killed seventy-two others seriously injured and more than three hundred injured enough to require hospital treatment. The King will later award the Edward Medal of the First Class posthumously to Dr. Andrea Angel and Mr. George Wenborne, who lose their lives in endeavoring to save the lives of others as a result of the explosion.

The submarines E36 (Lieutenant Thomas Bollen Seath McGregor-Robertson killed age 29) and E43 leave Harwick at 07:30 for a patrol of Terschelling.  At 11:26 just before they leave the coast E43 signals E36 to proceed independently.  At 13:30 E36 is to the port beam of E43 but out of sight by 15:00. The sea is running fairly high and at 18:50 E43 having lost her bridge screen eases to 5 knots and turns to fit a new one. This delay enables E36 to overtake her and at 19:50 off the Haaks Light Vessel, E43 suddenly sights a submarine on the port bow steering east and only 50 yards off.  The helm is put hard to starboard and engines full astern but E43 strikes E36 aft from the stern and rides right over her and sees her vanish on the starboard quarter in the dark.  E43 goes astern but finds nothing in the darkness and heavy seas. Among those killed on E36 in addition to her commander: