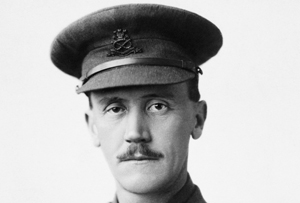 The armed merchant cruiser HMS Laurentic leaves Bucrana at 17:00 bound for Halifax with a secret cargo of five million pounds sterling of gold bullion (3,211 gold bars) to pay for munitions. Under the command of Captain Reginald Arthur Norton the Laurentic in bitingly cold weather strikes a mine off Fanad Head on the port side. The ensuing explosion is followed quickly by a second in the engine room. The ship sinks in forty-five minutes in one hundred ten feet of water, with three hundred fifty four of the four hundred seventy five on board being killed.  Although fifteen lifeboats manage to get clear, many of the crew will die of exposure.