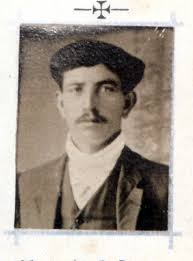 The German auxiliary cruiser Leopard is engaged and sunk by the boarding vessel S S Dundee and the cruiser HMS Achilles. After leaving port earlier in the month disguised as the Norwegian freighter Rena Norge the Leopard set sail on its mission to disrupt Allied commerce. Today it is stopped in the North Sea by the cruiser HMS Achilles and ordered to proceed to the boarding vessel S S Dundee for inspection. Heavily outgunned the raider’s commander, has no option other to proceed to meet the boarding vessel.  Captain Day of the Dundee dispatches a launch containing a boarding party with an officer and five men to investigate the mysterious ship. The German commander realizing he is about to be discovered detains the party and after about an hour opens fire on the Dundee with a salvo of two torpedoes. The steamer maneuvers out of the way barely in time and the torpedoes miss. Day orders his gun crews to open fire and a hail of shells strike the Leopard damaging a gun and setting fires. The Achilles hearing the sound of gunfire returns to the scene and opens fire on the raider as the Dundee withdraws. Shortly after the Achilles’ arrival the Leopard sinks with all 319 hands going down with the ship. Damage to the British vessels is light but all six members of the boarding party members are trapped and lost in the Leopard when it sinks. Ironically of the boarding party four of them are Seamen in the Royal Navy Reserve and are named Anderson.

The tanker Narragansett (Master Charles Edward Harwood) is torpedoed and sunk killing forty-six including her master southwest of Ireland. The tanker has a long history including answering the distress calls from the Colturno when she caught fire in the Atlantic in October 1913 and played an important role in the rescuing of the 523 survivors by pumping some of her oil onto the rough sea which stopped the breaking waves  by breaking waves smashing lifeboats. She was also involved in the Lusitania sinking in her distress calls and went to assist only to be fired on by U-20 her torpedo missing by less than ten feet.

The Drifter Protect (Skipper George Findlay) is sunk by a mine in the Dover Straits losing her entire crew of ten.