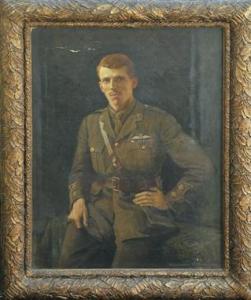 The new Bristol F.2a fighter, of which so much is expected, finally comes into action on this day.  For 48th Squadron’s first ever operation, six Bristols make an offensive patrol over Douai.  Leading them is Captain William Leefe-Robinson VC, famous by this time for having shot down the SL11 airship. The patrol has the great misfortune to meet Manfred von Richthofen and the Albatros D.III’s of Jasta 11 and in the disastrous air battle that follows the patrol is virtually destroyed.  Four of the aircraft are shot down within thirty minutes beginning at 10:15, the pilots and observers, including Leefe-Robinson, being made prisoner, one of which will die of his wounds the following day.  These events the mauling of the new fighter and the loss of the Victoria Cross winner, causes great anxiety for the Royal Flying Corps while a surge of confidence passes through Germany’s fighting units.

The submarine C7 (Lieutenant Arthur Walter Forbes) sinks the German submarine UC68 near Schouwen Bank.  Lieutenant Forbes will be killed in March 1918 when submarine H5 is sunk in a collision.