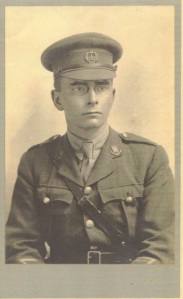 East of Loos Second Lieutenant Frank Bernard Wearne (Essex Regiment) commanding a small party in a raid on the enemy’s trenches gains his objective in the face of fierce opposition and manages to maintain his position against repeated counter-attacks. Then, realizing that if the left flank is lost his men will have to give way, he leaps on to the parapet and follows by his left section, runs along the top of the trench firing and throwing bombs. While doing this he is severely wounded, but continues directing operations until he receives two more wounds, the second mortal. For his efforts he will be awarded a posthumous Victoria Cross.