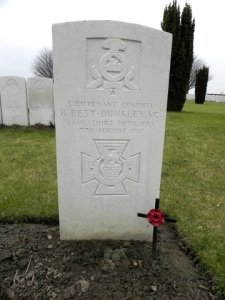 At about 06:00 four small advanced listening posts near Groenenburg Farm occupied by the East Surrey Regiment repel in a thick mist an attack on their left flank by thirty-five to fifty Germans.  About 08:00 another attack from the front is driven off with loss to the enemy, but a third attack, this time on their left right flank, compels the garrisons of the post to fall back through Jordan Trench to the supporting post known as Alarm Weg leaving approximately fifteen behind either dead or wounded. Later in the morning the Commanding Officer, comes up to make a personal reconnaissance. While observing over the parapet, Lieutenant Colonel Henry Victor Mottet de la Fontaine DSO (commanding 5th East Surrey Regiment) age 44 is shot through the head by a German sniper while investigating his battalion’s situation after an enemy counter-attack, dying soon afterwards. He is a South African War veteran. Second Lieutenant L H Webb returns with valuable information and that night leads forward under heavy shell fire a party which re-establishes the front line. For this service he will awarded the Military Cross.