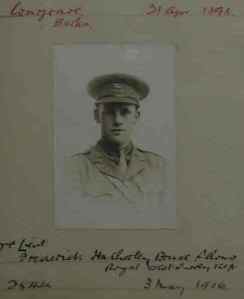 The well-lit hospital ship Rewa, under the command of Captain J E Drake, is torpedoed and sunk by the German submarine U55 at about midnight as she approaches the Bristol Channel waters supposedly open to hospital ships.  The officers and crew number fifty-one British and one hundred sixty native seamen.  There are two hundred eighty-seven wounded on board, including thirty cot cases.  She has come from the Mediterranean and carried Spanish commissioners as far as Gibraltar.  The wounded are safely transferred to patrol vessels and there are only four casualties among the crew.  About ten minutes after the last boat is loaded the ship plunges head first into the water and disappears. Just before the engines stop, wireless messages are sent from on board which are picked up by three vessels, including a tank steamer and two patrol boats or mine sweepers and these craft divert their courses and steer at full speed to the crippled ship. The survivors are taken to Bristol.

In France a soldier drops a lighted match in a dug-out which is being used as a store for gunpowder. Although most of the gunpowder had been removed there is a considerable amount scattered on the floor, which catches fire. The soldier is overcome by the fumes and in spite of the volumes of smoke issuing from the dug-out Lance Corporal Sidney Williams (London Regiment) enters the dug-out and rescues the soldier who is by now badly burned and unconscious.  Williams who is severely burned has to carry the man up twenty steps and if not for his prompt action the man would have lost his life.  For his actions Corporal Williams will be awarded the Albert Medal.