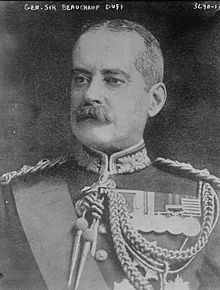 During the war, the Mesopotamian Campaign was under the responsibility of the Indian Army until the disaster surrounding the surrender at Kut. The campaign started well with the landing in Basra in November 1914, but the attack on Baghdad by 9,000 troops of the 6th Indian Division commanded by General Townshend in 1915 ended in catastrophe when the remnants of the British invasion force were surrounded in Kut El Amara, and three attempts to relieve the trapped British and Indian troops also ended in failure, at the cost of 23,000 lives. The surrender on 29 April 1916 has been described as one of the worst military disasters of the British Army.  Consequently the Commander in Chief India, General ‘Sir’ Harry Beauchamp Duff was relieved of command on 1 October 1916. In 1917, the Mesopotamia Commission of Enquiry was damning in its conclusions. While General Townshend was exonerated, the Commission was harsh towards the Government of India and Duff together with the Viceroy, Lord Hardinge. Both were found to have showed little desire to help and some desire actually to obstruct the energetic prosecution of the war. General Nixon, the Commander-in-Chief of the Mesopotamian Expeditionary Force, was also held responsible for the failed campaign. Unable to live with the shame, Duff committed suicide today.

Air fighting on the Western Front is light and the only British casualty of the day is a wounded pilot.

Goeben and Breslau leave the Dardanelles to attack Imbros sinking the monitors Raglan (6,150 tons) and M28 (540 tons).  One hundred twenty-seven sailors are killed including

While heading for Mudros, Breslau strikes four mines in quick succession to the northwest of Rabbit Island and sinks.  Five Turkish destroyers endeavor to reach the point, but are driven off by two British destroyers.  Goeben also strikes two mines, and then another trying to re-enter the Dardanelles, and finally runs aground off Nagara Point.