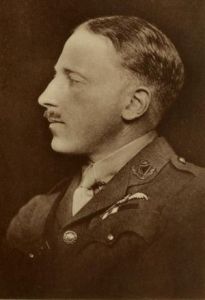 Major William Robert Gregory MC (Connaught Rangers attached Royal Flying Corps) is killed when an Italian pilot mistakenly shoots him down near Grossa, Padua, Italy.  The only child of the late Right Honorable ‘Sir’ William Henry Gregory KCMG former Member of Parliament and sometime Governor of Ceylon and Lady Gregory was born on 20th May 1881 in County Galway, Ireland. An accomplished artist, he worked in the design studio of Jacques Émile Blanche, and had his own exhibition of paintings in Chelsea in 1914. The Abbey Theatre, in its earlier days, owed much to the scenes designed and painted by him, especially for Synge’s Deirdre of the Sorrows, William Butler Yeats’ Shadowy Waters, and his mother’s The Image.  He was a fine boxer, being chosen as light-weight boxer for Oxford against Cambridge, and in Paris as a candidate for the amateur championship of France, played cricket for his county club and for the Gentlemen of Ireland, and was well known in the hunting field and in point-to-point races. He was good enough at cricket to play once for the Ireland cricket team, taking 8/80 with his leg spin bowling in a first-class match against Scotland in 1912.  His bowling performance in that match remains the tenth best in all matches for Ireland and the fourth best in first-class cricket for Ireland. His bowling average of 10.22 is the second best for Ireland in first-class cricket.

Major Gregory joined the Connaught Rangers in 1915, and in January 1916, transferred to the Royal Flying Corps.  He went to France in the following August, and saw eleven months’ continuous active service in a Scout Squadron, being awarded the Military Cross for acts of bravery in the air and for ‘having invariably displayed the highest courage and skill, and the Legion of Honour for “many acts of conspicuous bravery.”  In the autumn of 1917 he was given command of a Scout Squadron in France, and in November, 1917, he took it to Italy.  Gregory’s death had a lasting effect on William Butler Yeats, and he became the subject of four poems by him; In Memory of Major Robert Gregory, An Irish Airman Foresees His Death, Shepherd and Goatherd, and Reprisals.

An Irish Airman Foresees His Death:

I know that I shall meet my fate
Somewhere among the clouds above;
Those that I fight I do not hate,
Those that I guard I do not love;
My county is Kiltartan Cross,
My countrymen Kiltartan’s poor,
No likely end could bring them loss
Or leave them happier than before.
Nor law, nor duty bade me fight,
Nor public men, nor cheering crowds,
A lonely impulse of delight
Drove to this tumult in the clouds;
I balanced all, brought all to mind,
The years to come seemed waste of breath,
A waste of breath the years behind
In balance with this life, this death.

While on an offensive patrol, Flight Lieutenant (Acting Flight Commander) Wilfred Austin Curtis (Royal Naval Air Service) follows three two-seater enemy machines and an enemy scout through the clouds.  Five other scouts then join the enemy.  He dives and fires into an enemy two-seater from about forty feet behind.  The enemy machine falls over on its side and starts to spin, and is observed by another pilot to break up in the air while spinning down.   The two aircraft lost in air combat cause one fatality and one prisoner.

S S Birkhall (Master Niel Hugh Mackinnon) is sunk by a German submarine four miles south east of Cape Doro. The master and one other crew member are killed.