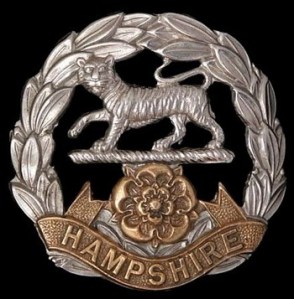 Cap badge of the Hampshire Regiment

British night-bombing aircraft carry out a raid on the railway junction at Courcelles-les-Metz, south-east of Metz dropping nearly one ton of bombs.

Bertrand Russell is sentenced to six months in prison for advocating in public that the British government accept a German offer to open peace negotiations.