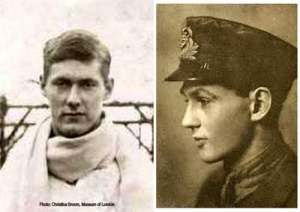 Flight Commodore Miles Jeffrey Game Day DSC (Royal Naval Air Service) drowns after being shot down in an action with six enemy aircraft twenty-five miles north of Dunkirk.  His machine is hit and busts into flames, he then nosedives, flattens out and lands in the water.  He is seen to scramble onto the rear of the fuselage and wave to other members of his flight, who drop a lifebelt to him. Another aircraft is dispatched with a life-raft as soon as the flight lands, and a motor launch from Dunkirk reaches his reported position within 90 minutes, but no trace can be found of him or his aircraft. He is a noted oarsman at Cambridge rowing Blue and one of the Great War Poets and dies at age 21.  He is also a 5-victory ace. His brother was killed in October 1915. On hearing of his elder brother’s death, he composed a six-verse memorial poem entitled “To My Brother”, in which he reminisces on the dawning of a day on the Ouse which had played such an important part in his late brother’s life. It commences:

This will I do when we have peace again,

Peace and return to ease my heart of pain.

Crouched in the brittle reed beds wrapped in grey,

I’ll watch the drawing of the winter’s day.