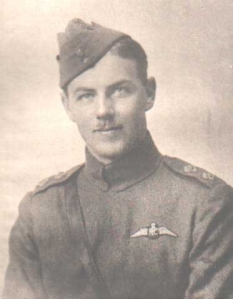 The French airship AT-0 is patrolling in the English Channel when at 14:20 a vessel is spotted to her north east.  The airship draws close for recognition purposes and according to her commander, the submarine fires rockets at her.  Four 52-kilo bombs are dropped by the airship and the submarine D3 (Lieutenant William McKinstry Maitland-Dougall age 23) disappears and several minutes later men are seen in the water.  Attempts are made by the airship to rescue the men but it proves impossible.  The airship withdraws to seek help but all 29 of the men drown before help arrives.  The identifications rockets fired by D3 are mistaken for aggressive gunfire causing the error off Fechamp. The commander’s brother was killed in April 1917 serving in the Central Ontario Regiment.

Captain Richard James Tipton (Royal Field Artillery attached Royal Flying Corps) dies of wounds received three days earlier at age 25. In June 1916 while on a bombing raid on El Arish he was forced down in enemy territory where he burned his machine before being taken prisoners by the Turks. After fourteen months as a prisoner while being moved to another prison he and two other officers escaped and after forty-nine days journey including recapture and rescue by bandits he reaches Russia and is sent back to England where he rejoined the Royal Flying Corps.