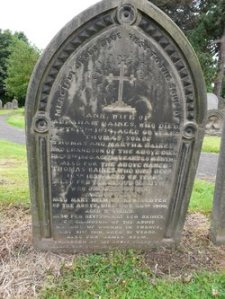 Captain Allan Hepburn and his observer Sergeant Thomas Proctor shoot down an Albatros near Ostend.

The destroyer HMS Fairey sinks after ramming and destroying the German submarine UC-75 in the North Sea.  The U boat has previously been rammed by the steamer Blaydonian, damaging the casing.  The U boat then surfaces and the commanding officer of the Fairy believing her to be British issues the normal challenge which is not replied to.  Fairy then rams the U boat at the stern and again just forward of the conning tower.  Two of the men from the submarine jump on the forecastle of the destroyer and another twelve crewmen are rescued from the water.  The submarine sinks but the bows of the destroyer are so seriously damaged that she also sinks. There are no British casualties.

Captain Richard Walker Buswell (Royal Air Force) is flying at Yatesbury when he sees another machine sideslip to the ground and burst into flames.  He flies to the location and lands and seeing that the pilot is enveloped in flames is still alive he dashes into the fire and endeavors to rescue him.  Several attempts have already been made to reach the pilot but owing to the very intense heat they were unsuccessful.  Captain Buswell manages to get hold of the pilot’s clothes which being in flames come away in his hands. He then gets hold of a belt and succeeds in extricating the pilot but it is too late to save his life. For his efforts Captain Buswell will be awarded the Albert Medal.