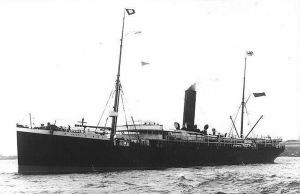 The steamship Orissa is torpedoed and sinks in the North Atlantic twenty-one miles south west from Skerryvore killing six of the crew. The explosion took place about twenty feet from the store room where some members of the crew including Boatswain Hugh Brown and his son who was the Steward’s Boy are receiving their tobacco issue.  The store room is immediately flooded but the Boatswain and his son are able to fight their way to the stairway leading to the weather deck, the bottom stairs of which have been blown away.  The boy manages to reach the weather deck but Brown then hears the Storekeeper who is still in the flooded store room calling for help.  As soon as he has been assured of his son’s safety Brown wishes the boy farewell and though he could probably have saved himself he turns back in the hope of assisting the Storekeeper.  The ship sinks not long after and neither the Boatswain nor the Storekeeper is seen again.  For his actions Boatswain Brown is posthumously awarded the Albert Medal.  Hugh Brown dies at age forty-three.

Observer Sergeant Ernest Antcliffe achieves his first victory when he shoots down a Fokker D VII near Thorout while flying with Lieutenant J P West.