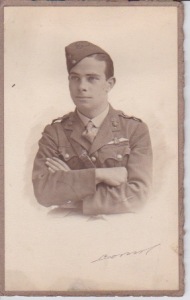 East of La Bassee, Captain Edward Corringham Mannock attacks and crashes an enemy two-seater from a height of 10,000 feet.  About an hour later he attacks at 8,000 feet a Fokker biplane near Steenwercke and drives it down out of control, emitting smoke.

Cossacks of the Dunsterforce rout remnants of the Turks just south of Enzeli.

Near Marfaux, France, Sergeant John Meikle VC MM (Seaforth Highlanders) single-handed and armed only with a revolver and a stick, rushes and puts out of action a machine-gun which is delaying his company’s advance. Shortly afterwards, seizing a rifle and bayonet from a fallen comrade, he charges another machine-gun post, but is killed almost on the gun position at age 19. His bravery enables two other men who followed him to put this gun out of action. For his actions he will be awarded a posthumous Victoria Cross.