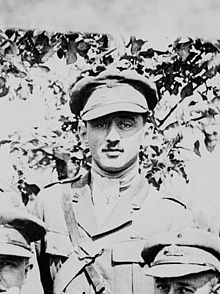 Lieutenant Jean Baptiste Arthur Brillant (Quebec Regiment) dies of wounds received over the past two days performing acts that will win him a posthumous Victoria Cross. When in charge of a company which he leads in attack during two days with absolute fearlessness and extraordinary ability and initiative, the extent of the advance being twelve miles. On the first day of operations shortly after the attack has begun, his company’s left flank is held up by an enemy machine gun. Lieutenant Brillant rushes and captures the machine-gun, personally killing two of the enemy crew. While doing this, he is wounded but refuses to leave his command. Later on the same day, his company is held up by heavy machine-gun fire. He reconnoiters the ground personally, organizes a party of two platoons and rushes straight for the machine-gun nest. Here 150 enemy and fifteen machine-guns are captured. Lieutenant Brillant personally killing five of the enemy, and being wounded a second time. He has this wound dressed immediately, and again refuses to leave his company. Subsequently this gallant officer detects a field gun firing on his men over open sights. He immediately organizes and leads a “rushing” party towards the gun. After progressing about 600 yards, he is again seriously wounded. In spite of this third wound, he continues to advance for some 200 yards more, when he falls unconscious from exhaustion and loss of blood.

The defensively armed tanker Tatarrax (Master William Read age 39) is torpedoed and sunk by UC.34 in Mediterranean off Rosetta, Egypt. Her entire crew of 61, primarily Asian merchant seamen are lost.