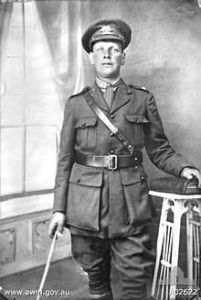 The 17th (Duke of Cambridge’s Own) Lancers are mounted and among the leading regiments of the current offensive capturing enemy ground and prisoners. In the 24 hours their losses will include 2 officers and 10 other ranks killed, 24 other ranks wounded two gassed and two missing with 52 horses killed and missing.

Three days after performing acts that will win him the Victoria Cross. Lieutenant Alfred Edward Gaby (Australian Infantry) is killed in action leading an attack at Villers-Bretonneux.

The advance having been checked by intense machine-gun fire, Lieutenant James Edward Tait MC (Manitoba Regiment) rallies his company and leads it forward with consummate skill and dash under a hail of bullets. A concealed machine gun, however, continues to cause many casualties. Taking a rifle and bayonet Lieutenant Tait dashes forward alone and kills the enemy gunner. Inspired by his example his men rush the position, capturing twelve machine guns and twenty prisoners. His valorous action clears the way for his battalion to advance. Later, when the enemy counter-attacks our positions under intense artillery bombardment, this gallant officer displays outstanding courage and leadership, and, though mortally wounded by a shell, he continues to aid and direct his men until his death.