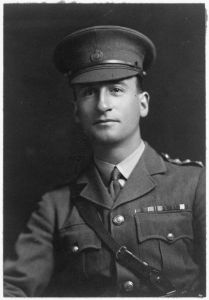 At 04:55 the 1st Coldstream Guards set off towards their objectives along the Boiry – Moyenneville road.  The fog is very heavy and is worsened by a smoke barrage laid down by an artillery barrage making it impossible to see any farther than 3 yards in front.  They are supported by 10 tanks of the 12th Tank Corps battalion which prove little help in the fog and smoke.  By 06:30 the battalion has covered 1,000 yards and captured their objectives.  Killed during this assault is the commander of No 4 Company

Second Lieutenant Ernest John Clark (Royal Air Force) while reconnoitering a road at low altitude, bombs with great success fourteen enemy motor transports.  On a second flight during this same night he bombs enemy horse transports, destroying eight transport wagons and their teams.  Later, with his last bomb, he obtains a direct hit on two motor lorries.  During the morning, flying in the mist at 200 feet, and subjected to heavy hostile fire, Second Lieutenant Alexander Melvin Anderson (Royal Air Force) locates our cavalry and the enemy positions.  In the afternoon he makes a most valuable and accurate report and situation map.  While on this duty his pilot is wounded and forced to land just west of our lines; Lieutenant Anderson extricates him from their machine under heavy fire and carries him to a dressing station.

At Courcelles, France, during an attack, the infantry loses their bearings in dense fog and Lieutenant Colonel Richard Annesley West (North Irish Horse attached 6th Tank Corps) at once collects any men he can find and leads them to their objective in face of heavy machine-gun fire. For his action today and on 2 September at Vaulx-Vraucourt he will be awarded the Victoria Cross posthumously. Also lost today serving in the 6th Tank Corps is

Second Lieutenant Thomas Godwin Hobbs (Royal Air Force) performs six hours of flying.  He is twice attacked by large formations of enemy airplanes, but on each occasion, by skillful maneuver and resolute fighting he drives them off and continues his patrol, bringing back much valuable and accurate information.  Also on this day he attacks enemy transport, causing great confusion and inflicting heavy casualties.