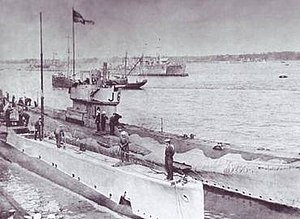 The submarine J6 (Lieutenant Commander Geoffrey Warburton) is lying on the surface outside Blythe.  The Q-ship Cymric is in the area and has already encountered two British submarines this day.  At 16:00 a third submarine is spotted closing to have what Cymric thinks is a good look before attacking.  The Cymric at once goes to action stations believing the submarine to be the German U-boat U-6.  As shells pour into the submarine the signalman attempts to hoist a recognition signal but is killed.  J6 attempts to lose the Q-ship by entering a fog bank but Cymric follows and finds the submarine settling in the water. It is only when survivors are picked up that the mistake becomes clear. Sixteen of her crew are killed.