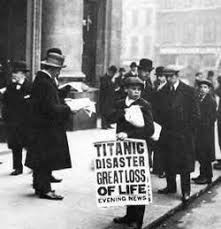 Gunner Edward John Parfett MM (Royal Field Artillery) is killed at age 22. Ned Parfett was the 16-year-old newsboy selling morning papers and holding the banner headline on the street-corner in London on the April morning in 1912 which announced the sinking of the Titanic. The photograph has become an iconic image, symbolising the shock and disbelief that greeted news of the disaster. Parfett joined the British Army in 1916, serving as a dispatch-rider and an observer on the Western Front, being mentioned in dispatches. Today he is about to head home on leave when he pauses to collect some fresh clothes from a quartermaster’s store just behind the lines near Valceniennes. At that moment, it is struck by an artillery shell and Parfett is killed. He is one of four brothers all of whom served in the war, the other three survived.

The Battle on the Piave turns as the Austrian forces attempt a final resistance on the Monticano but are broken.  Although enemy reinforcements are brought up to hold the line a breach is made which fundamentally splits the two Austrian Armies and a rout quickly develops.

The Admiralty trawler Thomas Cornwall (Skipper John Slater RNR) is sunk after a collision off Flamborough Head with a loss of twenty.  Her skipper is killed at age 29.