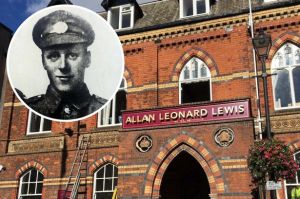 Three days earlier at Rossnoy, near Lempire Lance-Corporal Allan Leonard Lewis (Northamptonshire Regiment) is in command of a section on the right of an attacking line, held up by intense machine-gun fire. He sees that two guns are enfilading the line and crawls forward alone, successfully bombs the guns and by rifle fire makes the whole team surrender. Today he rushes his company through the enemy barrage, but is killed while getting his men under cover from heavy machine-gun fire. For his efforts on both days he will be awarded a posthumous Victoria Cross. He is killed at age 23.

Private Francis Turbutt Earley (King’s Own Yorkshire Light Infantry) dies of wounds received the previous day in the chest at age 19.  The young journalist wrote his last letter home the afternoon that he would later be wounded on.

Lieutenant Colonel Richard Annesley West (North Irish Horse commanding 6th Tank Corps) VC DSO MC is killed at Vaulx-Vraucourt at age 40.  He is a veteran of the South Africa War. He arrives at the front line when the enemy is delivering a local counter-attack. The infantry battalion has suffered heavy officer casualties and realizing the danger if they give way, and despite the enemy being almost upon them, Colonel West rides up and down in face of certain death, encouraging the men. He is eventually riddled with bullets and killed on the spot. For his actions today and previously at Courcelles he will be awarded the Victoria Cross posthumously.

At Pronville, France, Chief Petty Officer George Henry Prowse (Drake Royal Naval Volunteer Reserve) leads a small party of men against an enemy strong-point, capturing it, together with 23 prisoners and 5 machine-guns. On three other occasions he displays great heroism in dealing with difficult and dangerous situations, and at one time he dashes forward and attacks and captures two machine-gun posts, killing six of the enemy and taking 13 prisoners and two machine-guns. He is the only survivor of this gallant party, but his action enabled the battalion to push forward in comparative safety. For his actions he will be awarded a posthumous Victoria Cross as he will be killed in twenty-five days at age 32.

Private Hugh McIver VC MM (Royal Scots) is killed at age 28 near Courcelles ten days after performing acts that will result in him being awarded the Victoria Cross.  On 23rd August 1918 east of Courcelle-le Compte, France, he was employed as a company-runner and under heavy artillery and machine-gun fire carried messages regardless of his own safety. Single-handed he pursued an enemy scout into a machine-gun post and having killed six of the garrison, captured 20 prisoners and two machine-guns. Later he succeeded, at great personal risk, in stopping the fire of a British tank which was directed in error against our own troops.

By Royal Warrant the Guards Machine Gun Regiment is formed.  It is composed of four Machine Gun Battalions. 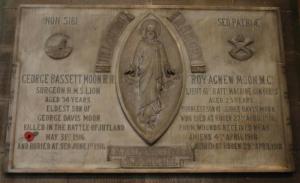 The Newfoundland House of Assembly unanimously passes the Conscription Bill. 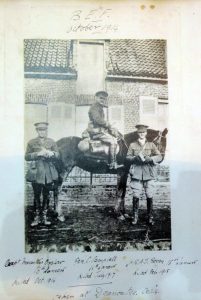 A German attack recaptures most of Moreuil Wood, and the nearby Rifle Wood one mile to the northeast.  General Seely is given command of the Allied counterattack.  The Canadian Brigade attacks in three waves, securing their flanks while moving through the wood and engaging the enemy in hand to hand combat. Once the German forces are again driven out, they commence heavy artillery bombardment and several counterattacks, however control of the wood remains with the Allies at the end of the day.  To the northeast, Rifle Wood is attacked at 09:00 and by 11:00 is also in Allied hands.  By 15:00 the Allied forces are relieved by fresh divisions.

At 02:40 the 2nd/21st London First Surrey Rifles Regiment begins an assault on the Turkish positions at Wadi Amman, Syria.  They capture 2 machine guns and 80 prisoners.

The troopship Celtic is torpedoed by UB-77 in the Irish Sea with the loss of six lives.

Brigadier General Charles Lionel Kirwan Campbell CB CMG (commanding 5th Cavalry Brigade, 2nd Cavalry Division) dies on service at home at age 44.  Charles Lionel Kirwan Campbell was commissioned in the Lancers on 13th February 1895. He saw active service on the North West Frontier (1897-8), including the Tirah expedition, and in the South African War (1900-1), where he spent a year as an ADC. From December 1901 to December 1906 he was attached to the New Zealand Defence Force. By the outbreak of the Gear War he was back serving with his regiment in the rank of major. On 5th October 1915 he was promoted GOC 5th Cavalry Brigade, a post he retained until 21st March 1918, when Lieutenant-Colonel W F Collins temporarily replaced him. Brigadier-General Campbell died ten days later at home.

The trawler Agate is sunk when she strikes a mine.  Four members of her crew are killed.

The battle of Cambrai begins at 06:00 with carefully prepared and predicted, but unregistered, fire barrage by 1,003 guns on key German defences, followed by smoke and a creeping barrage 300 yards ahead to cover the first advances. Despite efforts to preserve secrecy, the German forces have received sufficient intelligence to be on moderate alert: an attack on Havrincourt is anticipated, as is the use of tanks.

Initially there is considerable success in most areas the Hindenburg Line is penetrated with advances of up to 8 kilometers achieved. On the right, the 12th (Eastern) Division advances as far as Lateau Wood before digging in is ordered; the 20th (Light) Division forces a way through La Vacquerie and then advances to capture a key bridge across the St Quentin canal at Masnières. The bridge collapses under the weight of the crossing tanks. The bridge collapse halts the hopes for advance there. In the center the British capture Ribécourt and Marcoing, but when the cavalry passes through, they are dealt a sharp blow and fall back from Noyelles.

In the center the 51st (Highland) Division is stalled at its first objective, Flesquières, leaving the advances around it exposed. It is believed that the commander of the 51st General George Montague Harper substitutes his own tank drill for the standard one and that an excessive space between the tanks and the infantry contributes to the failure. Flesquières is also one of the strongest points in the German line and is flanked by other strong points. Its defenders acquit themselves well against the tanks, engaging them aggressively. Almost forty tanks are knocked out by the Flesquières artillery, including sixteen by a single gun reportedly manned by a lone gunner. Despite this the Germans are forced to abandon Flesquières during the night.

On the left the 62nd (2nd West Riding) Division sweeps all the way through Havrincourt and Graincourt to within reach of the woods on Bourlon Ridge and the 36th (Ulster) Division on their left reaches the Bapaume-Cambrai road. Of the tanks 180 are out of action after the first day, although only 65 have been destroyed. Of the remainder 71 have suffered mechanical failure and 43 had been ‘ditched’. The British had suffered approximately 4,000 casualties and have- taken 4,200 prisoners, a casualty rate half that of Third Ypres (Passchendaele), and a greater advance in six hours than in three months there.  However, the British have failed to reach the heights of Bourlon Ridge. The German command is quick to send up reinforcements overnight and is relieved that the British do not manage to fully exploit their early gains.

The 75th Division, the last one formed during the war, of Gurkas and British from India, captures the Jerusalem-Jaffa road and then tomorrow will capture the vital hill of Nebi Samwil, the key to the city. The division adopts a key as its unit symbol.

Eighteen scouts of the Royal Flying Corps leave the ground under most unfavorable weather conditions in order to reconnoiter certain areas, and Captain Edward Mannock returns first with valuable information, while many other pilots bring back information that is of considerable use.

During an attack the tank which Captain Richard William Leslie Wain (Manchester Regiment attached Tank Corps) is commanding is disabled by a direct hit near an enemy strong point which is holding up the attack. Captain Wain and one man, both seriously wounded are the only survivors. Though bleeding profusely from his wounds, he refuses the attention of stretcher-bearers, rushes from behind the tank with a Lewis gun, and captures the strong point, taking about half the garrison prisoners. Although his wounds are very serious he picks up a rifle and continues to fire at the retiring enemy until he receives a fatal wound in the head. It is due to the valour displayed by Captain Wain that the infantry are able to advance and due to his efforts he will be awarded the Victoria Cross posthumously.

British forces capture positions north of Beersheba in the 3rd Battle of Gaza.

On the Tigris the British rout the Turks near Dur 85 miles above Baghdad.

The merchant ship SS Cape Finisterre is sunk 1 mile south southeast of Manacles Buoy by a torpedo.  Among the 35 dead is her Master James Lochead killed at age 53.

The Balfour Declaration is established proclaiming support for a Jewish State in Palestine. 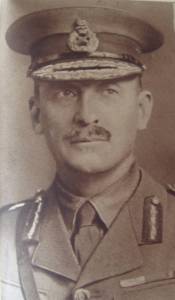 Brigadier General Cecil Godfrey Rawling CMG CIE DSO (62nd Brigade, 21st Division) is killed in action at age 47 by a shell in Hooge Crater.  He is killed as he was talking with friends outside his brigade headquarters.  He was the author of The Great Plateau in 1905 and The Land of the New Guinea Pygmies in 1913.  He received the Patron’s Gold Medal of the Royal Geographical Society. He served on the Northwest Frontier in 1897-8 and in the Tibet Expedition of 1904.