The monitor M21 strikes two mines off Ostend killing five.  She manages to steam to Dover but sinks there. 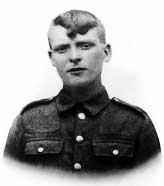 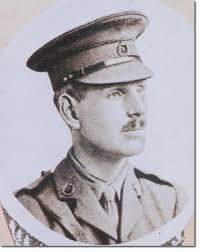 The Turks attack the bridgehead at El Ghoraniyeh and are severely repulsed.

Flight Commodore Miles Jeffrey Game Day DSC (Royal Naval Air Service) drowns after being shot down in an action with six enemy aircraft twenty-five miles north of Dunkirk.  His machine is hit and busts into flames, he then nosedives, flattens out and lands in the water.  He is seen to scramble onto the rear of the fuselage and wave to other members of his flight, who drop a lifebelt to him. Another aircraft is dispatched with a life-raft as soon as the flight lands, and a motor launch from Dunkirk reaches his reported position within 90 minutes, but no trace can be found of him or his aircraft. He is a noted oarsman at Cambridge rowing Blue and one of the Great War Poets and dies at age 21.  He is also a 5-victory ace. His brother was killed in October 1915. On hearing of his elder brother’s death, he composed a six-verse memorial poem entitled “To My Brother”, in which he reminisces on the dawning of a day on the Ouse which had played such an important part in his late brother’s life. It commences:

This will I do when we have peace again,

Peace and return to ease my heart of pain.

Crouched in the brittle reed beds wrapped in grey,

I’ll watch the drawing of the winter’s day. 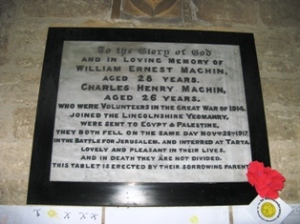 The Cambrai offensive officially ends and the British troops are ordered to lay wire and dig in and the Germans are quick to concentrate their artillery on the new British positions. Today over 16,000 rounds are fired into Bourlon Wood.

Colonel Tafel in command of 3,500 German troops from Mahenge cut off from the main for of von Lettow-Vorbeck surrenders near Newala, British East Africa.

The Guards Division clear Fontaine Notre Dame, but are counter-attacked by two German divisions and forced back. 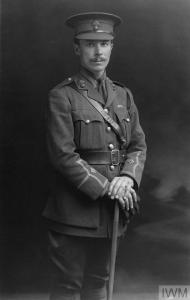 The final British effort at Cambrai is launched today by the 62nd Division aided by thirty tanks. Early success is soon reversed by a German counter rattack. The British now hold a salient roughly 11 km by 9.5 km with its front along the crest of the ridge.

Sergeant John Harold Rhodes VC DCM MM (Grenadier Guards) is killed in action at age 26. His Victoria Cross award was listed in the London Gazette four days earlier for actions in the Battle of Poelcapelle when he accounted for several enemy with his rifle as well as by Lewis gun fire, and, upon seeing three enemy leave a “pill-box” he went out single-handed through our own barrage and hostile machine-gun fire, and effected an entry into the “pill-box”. He there captured nine enemy including a forward observation officer connected by telephone with his battery. He brought back these prisoners together with valuable information. 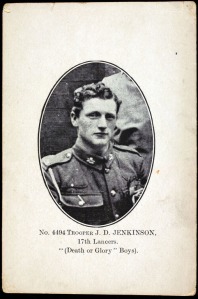 Temporary Lieutenant Arthur Christopher Paul Mackworth (Rifle Brigade attached MI5) dies at home at age 31.  His brother was killed in November 1914 and they are sons of ‘Sir’ Arthur William Mackworth 6th Baronet. A third brother was killed serving in the West Surrey Regiment at Ladysmith in January 1900.

The Coldstream Guards attack the German defenses south of the Houthulst Forest and in spite of appallingly thick mud, take and hold their objective.

Jewish spy Sarah Aaronsohn working for the British and sister of notable botanist Aaron Aaronsohn shoots and kills herself using a pistol concealed in the prison where she is held by the Turks.  She was arrested four days previously after her carrier pigeon with a message to the British was intercept by the Turks and the message it was carrying decrypted.  She endured torture for the four days she was held prior to her suicide and she died at age 27.

At Poelcapelle, Belgium when an advance is checked by intense machine gun fire from concrete blockhouses and by snipers Corporal William Clamp (Yorkshire Regiment) attempts to rush the largest blockhouse. His first attempt fails and the two men with him become casualties but he collects some bombs and two more men and dashes forward being the first to reach the blockhouse where he hurls his bombs killing many of the occupants. He then enters the blockhouse capturing a machine gun and about 20 prisoners whom he brings back under heavy fire.  He goes forward again encouraging his men until he is killed by a sniper at age 25. For his actions he will be awarded a posthumous Victoria Cross.

To a Choir of Birds

Green are the trees, and green the summer grass,

Beneath the sun, the tinest leaf hangs still:

The flowers in languor droop, and tired men pass

All somnolent, while death whines loud and shrill.

Whose sudden burst of rapture fills the ear!

Are ye insensible to mortal fear,

That such a stream of melody ye spill,

While murk of battle drifts on Auber’s hill,

And mankind dreams of slaughter? What wild glee

Has filled your throbbing throats with sound, until

Its strains are poured from every bush and tree,

And sad hearts swell with hope, and fierce eyes fill?

The world is stark with blood and hate – but ye –

Sing on! Sing on! In careless ecstasy.